Symposium: THE THREE GREAT MONOTHEISMS AND THE CHALLENGES OF THE TWENTY-FIRST CENTURY

The World actually is afflicted by problems of great importance and dramatic nature, compounded by a profound crisis of values and ethics.
The unsolved problem of hunger in the world, the severe effects of the global economic and environmental, as well as the growing manifestations of anger and intolerance against the rulers, are just some examples of problems on which today nobody can absolve himself to wonder about.
It’s therefore essential today a serious reflection on the state of moral confusion that plagues our times and that greatly complicates the identification of new and more sustainable ways of managing and co-existence.
In consideration of his authority that makes him protagonist among main Muslim intellectuals intent to create a solid bridge between Islam and Christianity, and in particular for his intellectual and philosophical work to underline the rational arguments for a reading of sacred texts of Islam, away from the closures of fundamentalism, the Ducci Foundation has decided to award the Peace Prize 2013 to Moustapha Cherif.

In consideration of his several initiatives related to a common path of peace in the context of inter-mediation, for his efforts in the creation of a new world, in the name of justice and peace, truth and freedom, the path to the common social objectives which give a soul and human face to the global. society, the Ducci Foundation has decided to award the Peace Prize 2013 to Paul Poupard for the unique contribution made in the management of his high mandate.

Named „Goodwill Ambassador“, „Knight of the Star of Italy“, „Dove of Peace“ for his extraordinary ability to play in music and lyrics the essential dialogue between Israelis and Palestinians, the Ducci Foundation awards the Peace Prize 2013 to Achinoam Nini for his admirable commitment to provide his art to service and improve the research for peace and mutual understanding between two communities.

In consideration of the exemplary dedication demonstrated in dialogue with everyone, believers and agnostics, for his love for knowledge and study without barriers, both in ecumenical dialogue with other religions, especially with Judaism and with Islam, which led him to become one of the most admired and respected personality of the Catholic Church, Ducci Foundation awards the Peace Prize 2013 in memory of Cardinal Carlo Maria Martini.
Receives the award the sister of Cardinal Martini, Prof. Maria Martini Facchini.

The events of the Arab Spring have undoubtedly changed the traditional patterns of approach to the Arab world and the Middle East, initiating an indirect search of models for the peaceful coexistence of peoples and cultures of the area. However, despite the recent events, there are several conflicts in the world fomented by religious or cultural reasons that require a rapid and effective response.

Which are the ways to a solution and, therefore, for a lasting peace?
In consideration of his sensitive commitment, first through the creation of the „Identity and Dialogue“ characterized from the beginning for his valuable work to promote dialogue and mutual understanding among peoples with a particular reference to the Palestinian context, as well as the significant role as Chairman of the „Foundation Lindth Anna“, the Ducci Foundation has decided to award the Peace Prize 2012 to SE Andre Azoulay.

In consideration of the significant contribution made on international level as a promoter of interreligious and intercultural dialogue within the International Commission for Peace Research, whose member is in the Executive Committee, and of the World Council of Religions for Peace), Ducci Foundation has decided to award the Peace Prize to the Grand Mufti of Bosnia and Herzegovina, Mustafa Ceric.

In consideration of his deep knowledge of the history of religions, especially the Roman Catholic Church, as well as his activities as a journalist and writer on the subject of seeking dialogue between cultures and religions, and especially for his role as Chairman of the Community of Sant ‚Egidio one of the institutions involved more concretely in the world for the affirmation of peace between peoples, the Ducci Foundation has decided to award the Peace Prize 2012 to Prof. Marco Impagliazzo.

In consideration of his authority that makes him the protagonist among main Muslim intellectuals, and in particular for his work as intellectual and philosophical, to underscore the rational arguments for a reading of the sacred texts of Islam, away from the closures of fundamentalism, the Foundation Ducci has resolved to award the Peace Prize 2011 to Mohamed Talbi.

In Consideration of his role as a diplomat of the Holy See, which has led him over the years to treat highly sensitive international issues, we remember his meetings in Cuba with Fidel Castro, Saddam Hussein in Baghdad and in Rwanda in the middle of genocide, and for its efforts to support the reasons for dialogue and to defend the reasons for peaceful coexistence of peoples, the Ducci Foundation confers the PeacePrize 2011 to Eminence Cardinal Roger Etchegaray.

In consideration of his commitment as Jewish intellectual and prominent figure of Italian and international Jewry, Ducci Foundation awards the Peace Prize 2011 to the memory of Tullia Zevi.

How does the message of the three great monotheistic religions represent now an added value and not an obstacle to dialogue and mutual understanding between cultures and therefore between individuals?
How to dispel generalizations and clichés that tend to identify conflicts of a political nature as real clash of civilizations?

The Chairman of the Pontifical Council for Culture, Gianfranco Ravasi, the former Israeli foreign minister Shlomo Ben Ami and the secretary of the Muslim Christian Dialogue Committee Mohammed Al Sammak, took part in the debate, moderated by Lucio Caracciolo, director of Limes and by the commentator Paul Branca. At the opening session participated the Vice Chairman of the Chamber Hon. Rocco Buttiglione.

Always engaged in the study of international politics and in promoting dialogue between different cultures, the Ducci Foundation offers a chance to study on the conflict between Palestinians and Israelis in the Middle East.
The invitation is open to two great personalities of international culture, Tahar Ben Jelloun and David Grossman, both staunchest supporters, not least through their works, the absolute necessity of a constant dialogue between two cultures and religions that would allow a peaceful living together of two states, one next to the other.

2006: I ANNUAL EDITION OF THE PEACE AWARDS

Within the initiatives to enhance the dialogue between cultures, the Ducci Foundation organized an event dedicated to one of the most topical issues not only, but also of great significance for the world balance present and future: the relationship between Europe and Islam.
The meeting was attended by the Hon. Umberto Ranieri, Chairman of the Foreign Affairs Commission of Chamber of Deputies, Senator Giuseppe Pisanu, former Minister of the Internal Affairs, the Hon. Gianni De Michelis, Chairman IPALMO, former Minister of Foreign Affairs, Renzo Guolo, a professor at the University of Padova, Amb. Mario Scialoja, Chairman of the Muslim World League in Italy, Abdellah Redouane, general secretary of the cultural, Islamic Center of Italy, the Hon. Khaled Fouad Allam, a columnist of the „Republic“, Eric Jozsef, a columnist for the „Libération“.
The moderator was Lucio Caracciolo, director of LIMES.
In this context, the Ducci Foundation organized the ceremony of the „Peace Prize“ to representatives of both Jewish and Muslim Communities in Italy, the chief rabbi, Riccardo Di Segni, and the General Secretary of the Islamic Cultural Centre of Italy, Abdellah Redouane, who showed with their visit to the Islamic Center of Rome, such as peaceful coexistence and dialogue between the two peoples is possible, making a symbolic but important step on the road to relaxation. 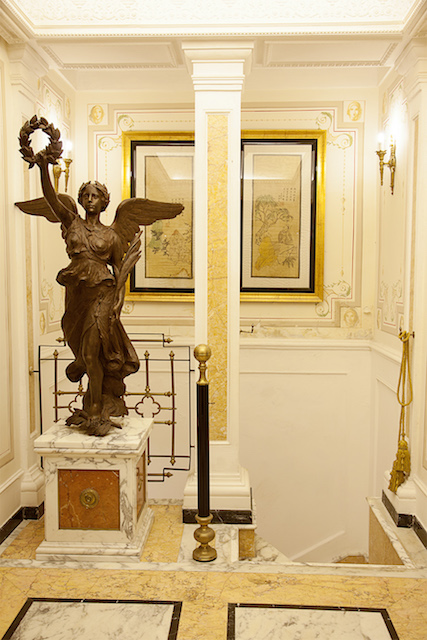